Within the hieron, the fiery light illuminated the faces of the fox girl, Qing Ling, and the fox clan chief.

The fox girl’s body almost crawled to the ground.

Her little face was filled with a sacred expression.

That was because if a god was willing to accept the Fox race, from today onwards, she would forever be the holy maiden of a god. Regardless of her body or heart, she would always belong to a god.

To her, this was an incomparably sacred matter. Therefore, she was nervous and excited. However, this did not affect the sacred feeling that rose in her heart. That delicate face was also filled with a firm expression.

On the altar, flames soared into the sky. The heat from the flames caused the temperature in the entire temple to rise.

Five minutes later, the existence on the altar finally responded.

The fox girl, Qingling, vaguely heard a solemn and vast voice telling her, “I, the Lord of Flames, accept your faith!”

However, when the fox girl Qingling listened carefully, she didn’t hear anything.

No, the divine spirit’s response was not a sound. It was not a human voice. As a god, how could he speak of human voices?

It was more like a mysterious and unknown revelation.

Soon after, the fox girl Qingling felt an invisible power envelop her. This power quickly dissipated into nothingness. However, the fox girl’s eyes soon lit up.

No, this feeling was not just visual. It was an omni-directional sensing. From the fox girl’s senses, this world seemed to have become even clearer.

“I can sense the magic!” Qingling understood the source of this change.

Immediately afterwards, this invisible ripple spread out in all directions from the temple.

However, the effects of the invisible ripples that spread out were far inferior to the effects that were applied to the fox girl’s body.

However, there were also cries of surprise among the Fox race.

“A miracle! This is a miracle!” outside the hieron, the waiting fox tribe shouted.

They were filled with reverence towards the great existences in the temple.

On Lin Yan’s system panel, the virtual godhead’s panel had changed from gray to normal black.

The power of belief was rapidly increasing. Just now, he activated a blessing skill.

If it was a First Tier mage or knight, they could provide a total of a hundred points of faith power every day. 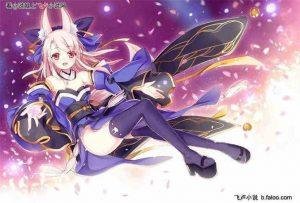 The character information is as follows:

If you like this chapter, you can give the translators some extra support at Ko-fi.